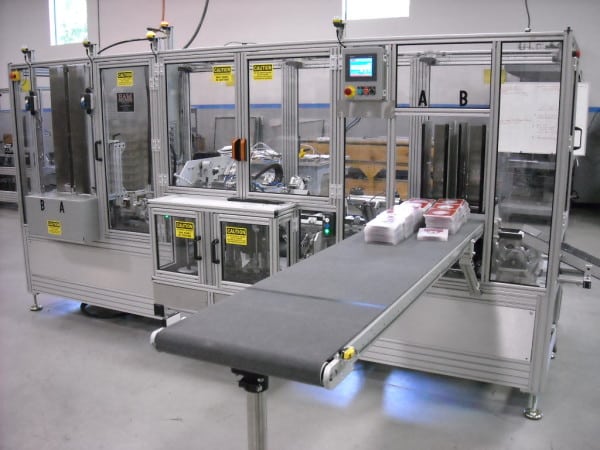 Automation increases productivity for manufacturers with fewer man-hours on the production line and greater man-hours shifted to designing, operating, directing, installing and troubleshooting automated systems, robots, software, machine algorithms and equipment. It has shifted the nature of manufacturing work by increasing productivity and the degrees of expertise necessary to ensure that productivity.

Three areas of expertise in automation production that have grown out of manufacturing automation are fixed, programmable and flexible automation. These automation types are engineered to meet specific production requirements of industry sectors.

Fixed automation manufacturing, also referred to as hard automation, is a system in which the automated production processes and assembly are preset to produce a single product. The sequence of production and operation is fixed by the configuration of tooling, equipment and machines allocated for high-production needs.

Fixed automation systems are geared to manufacture the same product style. Once the system is in place, i.e., fixed, it cannot change product styles, at least not without a high degree of difficulty. The system’s complexity is in the integration and coordination of the many sequences and operations in the production of a single unit.

This form of manufacturing automation is characterized by high initial investment for the design and engineering of the equipment. Once built, the equipment is relatively inflexible to accommodate any other configuration for other products. Fixed automation is specifically designed for high production rates. High initial costs for fixed automation investment are easily amortized by the very high demand rates and volumes of the products they are designed for.

Programmable automation allows for the configurations and operation sequences of equipment to change based on commands coded or programmed into the system. With a programmable automation system, new programs can be written for each process. It allows for production of products in batch quantities ranging from a several dozen products to as high as thousands of units produced in one run.

As the name suggests, flexible automation is a manufacturing method designed to easily adapt and respond to changes in production needs, such as the type and quantity of the product. Machines are controlled by computerized systems programmed and operated by humans utilizing computer coding or HMIs (Human Machine Interfaces). The system can be configured, i.e., programmed, to produce multiple product types simultaneously. Production and material-handling systems are controlled by a central computer system. The system is ideal for batch processes for companies that produce a variety of products in low-to-medium production runs.

Like fixed and programmable automation technology, flexible automation requires a high investment to produce a custom-engineered system. It’s able to perform production continuously and simultaneously for a mixture of products at medium production rates. Above all, the variations in product design are flexible. There is no downtime in production between batches and changeover is accomplished by computer programming. The system can also be used to implement a made-to-order strategy for clients to customize products.