Vibratory bowl feeders are a type of industrial machinery or equipment that is generally found in industrial production environments. They are considered the most versatile and widely used parts feeding systems for assembly line production. Resilient and efficient, the self-contained mechanical devices have been in use since the mid-Twentieth Century.

What is a Vibratory Bowl Feeder?

Bowl feeders work by aligning small parts and components and feeding them into a production line for further packaging or processing. When properly installed the feeder bowls are an important component to manufacturing automation; sorting and orienting bulk parts far more rapidly than a line operator, reducing labor costs and increasing accuracy. In terms of handling and sorting bulk products for further processing and packaging lines, the vibratory bowl feeder remains a reliable solution that greatly improves production line efficiency.

The self-contained feeder systems are comprised of a bowl feeder specifically tooled to orient components on a vibrating drive unit. The feeder consists of the bowl, which is mounted on a spring loaded base. The springs are designed to constrain the bowl’s movement vertically when activated. The components and parts move along an inclined track to the edge of the bowl. How the bowl is tooled orients the components into the required position for processing. If the parts are misaligned, they are pushed to the center of the bowl where they cycle through and travel up the track again for orienting.

A magnetic coil is fixed beneath the spring mounted bowl. The coil is then magnetized through an external power source to create an electromagnetic actuation, i.e., vibration. Once actuation of the bowl begins, the bowl is constrained to limited vertical movement because of how it’s mounted to the springs. In general, anywhere from 1 to 6 electromagnets are placed under the feeder base. Once the electromagnetic vibrations are converted to mechanical ones, the vibrations move the components and parts in the bowl feeder onto the bowl conveying tracks for production. 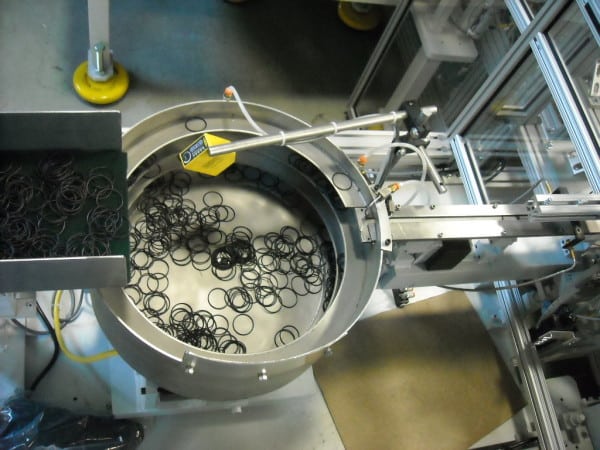 Vibratory bowl feeders serve a number of industrial sectors. Most commonly they are found in industries that require flexible feeding systems for volume production of parts or pieces. These include the pharmaceutical industry, or for processing consumer electronic components, electrical parts, plastic parts and components, cosmetics, food, fashion, automotive and much more.

One good example of a vibratory bowl feeder application are EAM’s vial and tube capping machines. The automated systems are designed to handle small polypropylene screw-on cap microcentrifuge tubes and vials. The caps and vials are fed from vibratory bowls at approximately 80 parts per minute. The system can also be easily modified to handle like products.

Vibratory bowl feeders offer industries a cost-effective automated system of production that increases efficiency while reducing production costs. If you have questions about how your manufacturing process could benefit from automation, contact the experts at EAM, Inc. today.