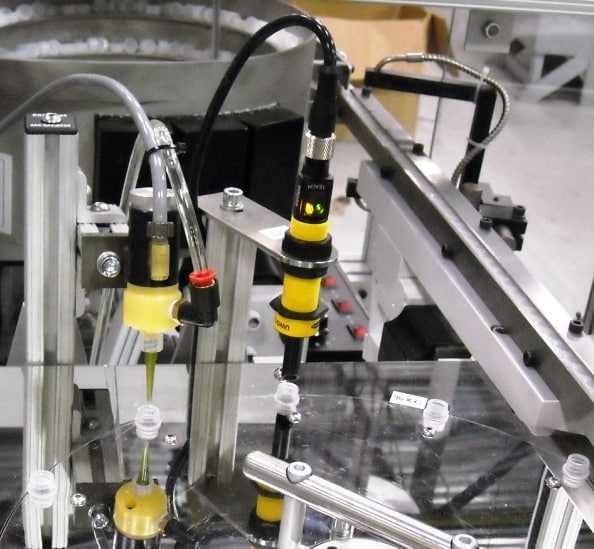 Such processes offer a number of advantages. Industrial robots can be scaled for use in any production environment – for high or low volume, for large, medium or growing companies, and can operate 24/7 without minimizing downtime. They can be programmed to adapt to new tasks quickly and used in multiple areas of any manufacturing facility. Industrial robotics also offers the opportunity for an increase in diversity of jobs. A variety of programmers, operators, techs, engineers and data analysts are required for system integration and managing interactive production lines and performance. 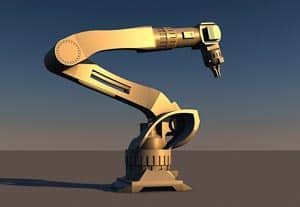 Articulated robots have the familiar mechanical configurations that resemble a human arm. The arm is mounted to a base of a twisting joint and can feature anywhere from two to ten rotary joints within the arm itself. Each of those joints offers an additional degree of motion and can be parallel or orthogonal in relation to each other. Articulated robots have four to six degrees of freedom and offer maximum flexibility. They are used in a wide range of applications large and small, such as food packaging, arc and spot welding, material handling, automotive assembly, steel cutting, and steel bridge manufacturing to name a few.

Nicknamed ‘Cobots,’ Collaborative robots are an automated robotic technology that are specifically designed to assist and interact with humans in a shared or defined workspace. Unlike other industrial robotic applications, the Cobot is not an autonomous robot that carries out manufacturing functions separate from human contact. Cobots are programmed to learn multiple tasks that directly assist humans, which allows them to operate interactively in close proximity to their human counterparts. There are numerous Cobot designs all of which are used to replace the mundane, repetitive motion tasks once performed entirely by humans, for example, pick and place, packaging and palletizing, and in quality control.

Relatively simple to use and program, Cartesian robots are used in the majority of industrial applications. Named for the Cartesian Coordinate system (X, Y, and Z), they deliver linear motion by sliding on its three perpendicular axes—they can move up and down, in and out, and side to side. Some even have an attached wrist that provides rotational movement. They are sometimes referred to as rectilinear or gantry robots. Their rectangular configuration allows for a wide degree of flexibility. The robot’s speed, precision, stroke length, and size are easily adjustable. Cartesian robots are used for pick and place operations, loading and unloading, CNC machines, 3D printing, assembly and sub-assembly, and nuclear material handling among other applications.

SCARA is the acronym for Selective Compliance Assembly Robot Arm. These industrial robots function on 3-axis similar to the Cartesian X, Y, and Z, but also have rotary motion. SCARA robots specialize in lateral movements and are ideal for assembly applications due to their faster movement and easier integration than cylindrical and Cartesian robots. Find SCARA robots in assembly applications, semiconductor wafer handling, packaging, palletizing, and biomedical applications.

Delta robots, also called parallel link robots, consist of three parallel joint linkages under a dome-shaped work envelope connected to a singular, common base. They are the fastest industrial robot—achieving very high speeds—and are also the most expensive. These robots are generally used for fast pick-and-place or product transfer applications such as moving parts from a conveyor belt and placing them in boxes or onto another conveyor belt. They are used in many industries—food, pharmaceutical, and electronic, but also for optical fiber alignment and flight and vehicle simulators.

One of the earliest industrial robots developed, Polar robots are named for how the axes of the connecting arms work together in a turret configuration which forms a polar coordinate. Also referred to as spherical robots due to how its central pivoting shaft and an extendable rotating arm operate within a spherical workspace. Its turret configuration sweeps a large volume of space, but only that which the arm can access within the workspace. Common applications for polar robots are for die casting, glass handling, stacking and unstacking, welding, forging, material handling, and injection molding.

Cylindrical robots are named for their operation within a cylindrical workspace with a pivoting shaft and an extendable arm. They have a minimum of one rotary joint connected to its base and at least one prismatic joint which moves vertically and by sliding. Because the cylindrical configuration offers both vertical and horizontal linear movement and rotary movement on a vertical axis, it is commonly used in tight workspace applications that require materials to be picked up, rotated and placed without any loss of speed and repeatability. It is used in such processes as machine loading and unloading, assembly applications, transporting LCD panels, and coating applications.