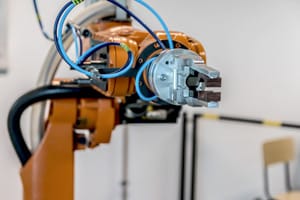 Factory automation is a holistic industrial process that utilizes technologies that automate tasks, processes and production designed to increase manufacturing output and maximize efficiency at reduced costs. In factory automation, products are manufactured, assembled, packaged, machined, and so forth. Control systems employ computer software to program equipment and machinery to perform manufacturing tasks that were historically performed manually.

The control systems automatically operate industrial equipment with a significantly lower level of operator involvement. In this regard, increased automation also increases plant safety. As automation is inherently designed to reduce human interaction with equipment and machines, it also serves to reduce and, in some cases, eliminate past risks associated with manually operating and handling dangerous equipment, or the risks associated with presence of labor in hazardous environments.

Factory automation systems generally consist of a combination of feedback loops and sensory programs that adjust automatically to operating conditions in real time. Though there are many processes applied to automate such systems, it is done under the umbrella of one of three categories of automation: fixed, programmable, and flexible.

Fixed automation, also called rigid or hard automation, dedicates automated equipment and machinery to execute repetitive tasks. It is considered inflexible in that once a fixed automation process is set up it cannot accommodate any other configuration for the manufacture of other products. The equipment cannot be reconfigured or modified to perform other operational tasks. Fixed automation is a good option for high-volume production of particular parts or components used in assembly, such as those parts required by the automotive industry.

Programmable automation and flexible automation each offer flexible automation solutions for manufacturers. Programmable systems are ideal for batch quantities of medium volume or, when cost-effective, in low or high volume runs. Controls can be reprogrammed or new ones written to alter automated processing tasks and sequences of production, but equipment such as industrial robots must be reconfigured to perform such tasks with each changeover.

The commonality of all factory automation processes are in the manufacturing of objects. On the other hand, process automation is used to automate industrial control applications that operate factories, plants and facilities, such as electric power plants, chemical plants, oil refineries, paper and pulp factories, cement factories, mining or mill operations, and the like. Process automation applications continuously monitor and control analog and digital measurements, using software specifically designed for controls of systems in a factory or plant and to automate monitoring tasks once done by people.

In process automation, a network interconnects controllers, sensors, actuators, valves, operator terminals and other hardware to regulate such process variables as temperature, flow, pressure, vibration, speed, switches and the like. The system uses open and closed control loop feedback systems, such as Cascade control loops, PID (proportional integral derivative) controllers and feedforward controls to monitor and to control process variables.

In process automation applications sensors distributed throughout the plant collect data on temperatures, pressures, flows and so on, automatically monitoring performance values, the quality of outputs, and determine the best settings to run the production equipment. The information is stored and quantified for continual analysis to ensure operational efficiency and safe operating conditions. Any deviation in operation settings are automatically adjusted to achieve the optimum production.