What Can A Cobot Do?

What Makes A Cobot?

Why Use A Cobot 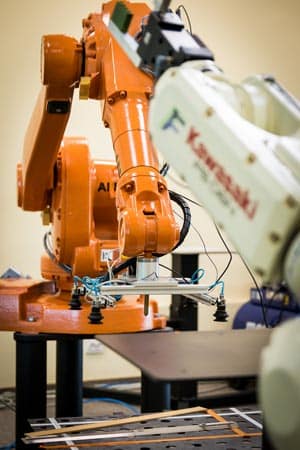 Merriam Webster’s primary definition for the word “robot” reads: “a machine that resembles a living creature in being capable of moving independently… and performing complex actions.” The first mechanical devices to meet that description were Egyptian water clocks, which used human figurines to strike bells on the hour to measure time as early as 3000 BC. The Greek inventor of both the screw and the pully, Archytus of Tarmtum, invented a pigeon that flew around 400 BC. In Hellenic Egypt after 200 BC, statues that used hydraulics were common, able to gesture, prophesy, and speak.

The first century AD saw Nero’s courtier Petronius Arbiter create a figurine that moved like a human. In the 1500s, Giovanni Torriani built a wooden robot for King Philip II of Spain that ran on springs, walked in a square, and kissed a cross, among other movements. The 1700s saw various types of robots that could move mechanically, though none were particularly useful. In the 1900s, Thomas Edison constructed a doll that could talk using rather simple methods of automation. Engineering in the mid-20th century saw robots finally develop enough to be useful, able to assist in heavy manufacturing. Automation has only continued to develop and its use increase within various industries since the 1950s.

A Brief History of Modern Robots

The first robots to be used commercially were developed in 1956 by two engineers, Joseph Engelberger and George Devol, who are known today as the fathers of modern robotics. Devol had patented a device called the Programmed Article Transfer in 1954, which they developed into a prototype they called Unimate, an electronic robot arm. It could perform dangerous or unpleasant jobs faultlessly so human workers would not have to do them. Yet manufacturers saw this new invention more as science fiction, until in 1961 General Motors bought a Unimate to remove heated die-casting components.

Automation in manufacturing in the United States saw other bumps along the way, as labor unions opposed robots replacing skilled human workers. A decade later, Engelberger even brought one of their 2-ton robots onto the set of the Tonight Show in 1966, where he directed it to conduct the band, use a golf club to putt perfectly, and even open and pour beer. Through custom automation they had built a machine that would change the world of manufacturing forever.

The same year Engelberger and Devol brought robotics to the attention of the field of engineering, automation was first used for an industrial welding system in Germany. With the help of German company KUKA, manufacturing automation technology became even more widespread, used for welding in refrigerators and washing machines, and later by German car company Volkswagen. This saw KUKA become a leader in robotics over the course of the next couple decades. The technology used by KUKA’s Magnetarc welder, developed in 1971, has been continuously updated and is still in use today. In 1973, KUKA built an industrial robot known as Famulus, which used a half dozen electric motors to drive multiple axes. The 1990s saw the company use personal computers to control robots, even exporting them later to China.

Manufacturing, automation, and engineering continue to develop, refining the place of robots in industries worldwide. Yet within automated factories, these huge manufacturing robots have always been kept separate from people, as their size and power made them unsafe for human workers to be in close proximity.

Cobot vs Robot: What’s the Difference?

The role of robots is changing, with some now able to work safely alongside and with factory workers on assembly lines. Developed in 1996 at Northwestern University by J. Edward Colgate and Michael Peshkin, they were initially referred to as “programmable constraint machines.” A few years later, they became known as collaborative robots, or “cobots,” a word that has since entered the English lexicon. This term was coined by post-doctoral candidate Brent Gillespie at Northwestern.

Yet robots are unlikely to be replaced completely. When it comes to manufacturing automation, traditional robots have their place and are now used in nearly every major industry. They have their downside, however, requiring more space while also being more dangerous for people to work around. Yet their greater power and speed make them excellent for work on larger projects.

What Can a Cobot Do

Cobots are now nearly as widespread as robots, spanning many industrial sectors. They are used for packaging, CNC machining, metal fabricating, testing, molding and inspecting products.

Cobots are well-suited for myriad activities, including:

When it comes to automation, manufacturing is already benefiting from the use of cobots. They have taken over a number of repetitive and dangerous tasks previously done by humans, lowering the incidence of workplace injuries.

What Makes a Cobot

One way in which cobots differ from their predecessors is their ability to provide custom automation, as they are easily programmable to do a variety of tasks. In contrast, most industrial robots have very specific uses. Because of their versatility, cobots are especially useful in smaller factories that utilize automation. Engineering designs additionally make them safer for humans to work around.

Cobots feature a number of advanced attributes that add to their usefulness. These include the use of artificial intelligence (AI), which allows them to learn how to perform a variety of tasks very precisely once taught. AI, especially when combined with machine learning (ML) capabilities, allows them to learn new duties easily.

These also include light detection and ranging (LIDAR) technology. A remote sensing method that uses light pulses from lasers, LIDAR measures the time it takes for pulses of light to bounce back from an object to the cobot’s vision sensors. From this, a cobot can immediately calculate its distance, much like a human being can estimate distances with their eyes, though with greater accuracy.

Why Use a Cobot

Cobots have many advantages over traditional robots used in factory settings. These require programming for each step in when performing complex tasks. This requires considerable programming proficiency, which limits a robot’s ability to adapt.

Though cobots also require programming, it’s a relatively simple process that is similar to creating macros on desktop computers. Instead of writing code, as one would program a robot, a factory worker can simply guide it through a series of steps with the help of a software application. These motions can then be saved using a smartphone or other mobile device.

Additionally, some cobots use custom automation programming to sense whether human coworkers are present, working in its own space next to human colleagues. They are capable of performing very precisely. Even though humans may be capable of performing the same duties, a cobot never tires and does the job in exactly the same manner every time, ensuring uniformity during production.

Cobots programmed with multiple skillsets can even move to different areas along the production lines, performing the different routines they were taught as needed with the simple press of a button. This makes them more valuable as time goes on, as they learn an increasing number of skills. Cobots combine the precision and power of traditional robots with cognitive functions like human beings to achieve ever greater productivity. As technology advances and cobots are used increasingly in manufacturing, automation will continue to make inroads that allow further collaboration between machines and humans.