Automation has transformed and continues to transform people’s lives worldwide. From self-driving vehicles to the manufacturing automation of industrial robots to logistical automation engineering in logistics, custom automation continues to change the world in which we live.

In modern times, the term “automation” became more widely used from about 1947, when General Motors founded its automation department. This occurred during a time many industries began to adopt feedback controllers, which began to come into industrial use during the 1930s. Automation can utilize computerized, electronic, electrical, hydraulic, mechanic or pneumatic controls, or often combinations of any of these. Automation engineering is present in a number of complex systems, appearing in factories, airplanes, bullet trains and other of modern life. Today, custom automation even appears online in search engines, virtual assistants and other Internet-based systems. 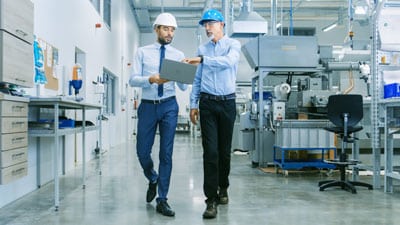 Modern engineers have envisioned fully-automated factories since the mid-20th century. Yet manufacturing automation only really took off in the 1980s, when vehicle manufacturers in the United States began replacing human workers with robots. They predicted what is now known as “lights-out” manufacturing, where all work on the factory floor is automated and humans only play a managing and maintenance role.

Industrial automation refers to the use of control systems – such as computers and robots – to handle various production activities previously done by human workers. Multiple industries now employ custom manufacturing automation to improve productivity. These applications have become increasingly diverse as more economic sectors embrace automation as a solution.

Industrial automation can be classified into these four general types:

As industrial automation has evolved, manufacturing has become more autonomous. New technologies like the Industrial Internet of Things (IIoT) have additionally revolutionized network architecture, introducing capabilities such as machine vision to monitor products for anomalies.

How Different Industries Benefit from Automation

Manufacturing automation will continue to advance, transforming an increasing number of industries. Regardless of the economic sector, custom automation will be adapted for new uses, replacing human workers, especially those working in dangerous conditions or doing mundane tasks. As such, it will prove a boon to workers, making workplaces safer and their jobs less tedious.

Though it began mechanizing in the late 1800s, the US agricultural industry has only recently turned to utilizing automation, as farms become larger and fewer farmers stay in the business. Custom automation technologies now aid farmers with tilling, irrigation and harvest, allowing fewer farmers to feed more people. Automated systems gather data to analyze crops, helping create insights that allow farms to save money by using less fertilizers, herbicides, pesticides and water.

With advanced automation, engineering in greenhouses utilizes Internet of Things (IoT) technology to track plant growth, much of this driven by the nascent US cannabis industry. Using artificial intelligence (AI), big data and smart sensors, high value crops like herbs can be more economically farmed. Utilizing robotics, such things as fertilizing, planting, water and weeding of crops can be done more efficiently, along with milking operations and transport of agricultural goods to market. These advances will help feed an ever-growing world population.

While people used to complain that robots took jobs away from people, recent labor shortages in the US workforce indicate the need for skilled workers. In its latest issue, the Civil Quarterly looked at a report produced by the Dodge Construction Network, which revealed civil contractors’ concerns about worker shortages in 2022.

Looking at the dearth of skilled workers, the report revealed that of civil contractors:

Automating repetitive labor like bricklaying, sawing or welding allows seasoned construction workers to train new workers to do more complex jobs. In this way construction companies can create skilled workers rather than having to hire them.

Food and beverage processing is an ideal candidate for automation. Engineering automated systems to conduct much of the monotonous work in the industry can save workers from injuries caused by performing repetitive tasks, while also increasing production. Automated machinery that measures and mixes ingredients, along with industrial ovens that utilize conveyancing systems, ensures product consistency. Automation also improves quality control and greatly decreases the amount human contact with foods, reducing the possibility of contamination and the need for recalls. Custom automation also helps identify where problems occur during production, which helps alleviate inefficiencies.

Custom automation has been introduced into restaurants to improve efficiency. It’s used for processing food orders, lowering the rate of human error. Automated machinery has also been introduced to spread dough and add toppings to pizza, or to cook all burgers exactly the same to ensure consistency.

Manufacturers benefit from the increased productivity brought by automation. Engineering robots into their industrial production lines, automakers in the 1960s were some of the first to utilize automated equipment to perform repetitive work. In the electronics industry, robots now also do such jobs as applying sealants to, inspecting, testing and handling PCBs (printed circuit boards), along with other picking and placing delicate parts. Automated machinery in the manufacturing sector has additionally improved efficiency, decreasing the need for unskilled labor.

While most other sectors look at using custom automation to improve efficiency, healthcare utilizes automation to allow medical personnel to focus more on treating patients. A prime use of automation involves mundane tasks like scheduling and paperwork. Some newer technologies also make for quicker, more accurate treatments. For example, AI technology can detect cancers as precisely as a trained radiologist, though it does this more quickly.

While automation engineering hasn’t yet developed robotics as sophisticated as those in the movie Robocop, robots in law enforcement are already in use for neighborhood watch functions, firefighting and other emergencies.

Many of these military uses also translate well to jobs done by civilian law enforcement.

E-commerce has brought retail to a whole new level. However, some brick-and-mortar stores now utilize automated technology to provide the efficiency of online shopping to physical stores. Amazon Go – Amazon’s in-person retail outlet for groceries – uses monitoring technology that allows customers to pick up products and walk out of the store without having to go through checkout. Instead, customers’ Amazon accounts are billed.

Autonomous driving has been touted as a safer way for drivers to use the roads, a product of AI and machine learning technology. An increasing number of vehicles are enabling vehicles to automatically brake and change lanes to avoid potentially fatal crashes. Such technology could make distracted and drunk driving a thing of the past. Autonomous public transport like trains and buses would be able to more efficiently get people to their destinations. Additionally, autonomous trucking is also on the horizon, with technology said to be viable as soon as 2024.

A plethora of other industries would benefit from custom automation solutions. Many of these applications look at optimizing energy usage, which is the main reasoning behind installing IoT technology in buildings to make them “smart” with automation. Engineering these automated systems will make businesses more efficient, reduce human error, offer employees safer work environments and generally enhance profitability.